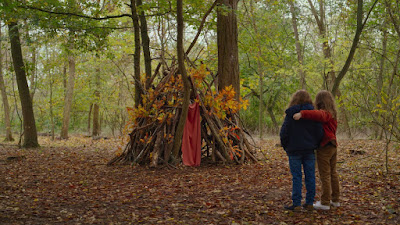 Céline Sciamma follow up to the Oscar nominated Portrait of a Lady on Fire is a small little trifle of a film. However with in the trifle is a wondrous experience.
The plot of the film has 8 year old Nelly going to stay at her grandmother's home after the woman dies from a long illness. she is there to clean out the house with her parents. But her mother leaves and her dad gets lost in cleaning. Nelly then goes off to find the the place where her mother built a hut a child. She finds the sot and another young girl about her age.
I can't say any more, only that some deeply moving things happen. I was tearing up several times from the turns in the film.
Its the turns that are keeping me from saying more.
Running a brisk 70 minutes or so the film moves like the wind. Its the perfect length for what it is, I say this because to make to any longer would require explanations that would remove the magic.
The film is highly recommended when it plays the NYFF or where ever you find it after that.
(Though I must admonish the NYFF for not including a second film in the screening since, despite the film being wonderful it leaves you wanting more.)
Posted by Steve Kopian at October 05, 2021