Celebrating A Movie Maverick: Sam Sherman Answers Sixteen Questions In Honor Of The Circle-Drive-In's Celebration Of His Films


Sam Sherman is an icon. He is in his way a cinematic God on the level with contemporaries like Roger Corman. He is a man who was responsible for not only making a whole slew movies (including many AL Adamson films) but bringing scores of films from around the world to the US (BEAST OF BLOOD and many giallos) to fill double and triple bills and TV slots.  Running Independent International he is responsible for many more films than his IMDB listings give him credit for.

I have loved Sherman’s films ever since I first ran across them. While some of them are among my most favorite films (the Blood Island films)  and while some are WTF were they thinking patch jobs made for a buck (BRAIN OF BLOOD)  they were all a hell of a lot of fun in the right frame of mind. They were fun because Sherman cared enough to have fun. As a result  he ended up making films that have stood the test of time. Consider that his films are still being watched, studied and celebrated half a century after they were made, while many other filmmakers have their films sitting unwatched and gathering dust.

Sam Sherman made films that touch the part of our soul where we are most comfortable and want to revisit often, usually with huge bowls of popcorn. He made films with just enough love that we end up loving them too.

This weekend the Circle Drive-in in Scranton Pennsylvania is having their First  Annual Blood-O Rama Shock Fest in  honor of Mr Sherman and is running four films connected to him- DRACULA VS FRANKENSTEIN and BRAIN OF BLOOD (which he produced) and MAD DOCTOR OF BLOOD ISLAND  and BEAST OF BLOOD which he brought to the US.

While Mr Sherman is not going to be attending the Shock Fest, I was given a chance to interview Mr Sherman.  While time has prevented me from doing a long interview with him for the moment (one is coming) I did manage to ask Mr Sherman a few questions via email  specifically geared toward the screenings at the Circle Drive-in.

I want to thank David Sehring for setting this up. I also want to thank Mr Sherman for taking the time to do this (I can’t wait to really have a sit down with you) 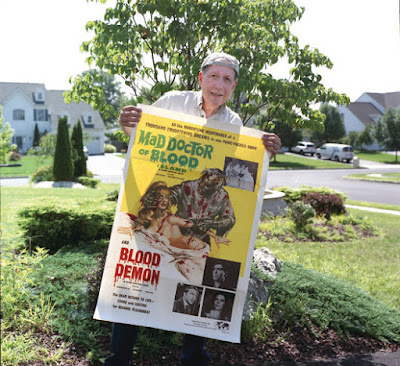 STEVE: With the Circle Drive-in doing an evening of your films, and since so many of your films played in drive-ins, I was wondering if you like going to the drive in and if you still go?

SAM:I used to live by The Whitestone Drive-In in the Bronx and enjoyed the drive-in experience.  Sadly, only one drive-in survives in New Jersey where I live,  so I don't get much of a chance to go these days.

STEVE: Does it surprise you that 50 years on that the films you made and released are still being talked about, shown, studied  and the source of tributes?

SAM: I'm surprised, pleased and hope people enjoy the films.  Ever since my partner Al Adamson passed, I've put a great effort in to keeping his memory alive.

STEVE: Two of the films the Circle Drive-in is showing are from your friend Al Adamson. (BRAIN OF BLOOD and DRACULA VS FRANKENSTEIN) . How important was Adamson to the success if Independent International.

SAM: Very important.  He had a unique way of looking at films and scripts and made interesting pictures. He had a specialized team of good people who worked with him including his wife, Regina Carrol.

SAM: I wasn't involved in the shooting of the original filming for THE BLOOD SEEKERS which I  later reimagined as Dracula vs Frankenstein

STEVE: The Circle Drive-in is showing two of the Blood Island films (MAD DOCTOR OF BLOOD ISLAND and BEAST OF BLOOD). I know that the films were made by Eddie Romero in the Philippines however I was wondering if you had input into the films? Additionally did  you have any hand in the production of any of the other films from around the world that you released?

SAM: I often reviewed the scripts

I helped get Ronald Remy from the Blood Drinkers cast as Dr. Lorca in The Mad Doctor of Blood Island.

I created and produced the OATH OF GREEN BLOOD for MAD DOCTOR which was shot by Eddie Romero to my direction.

STEVE: The Blood Island films had various types of ballyhoo attached to them, say the Oath of the Green Blood as part of MAD DOCTOR. Do you miss the says of those sort of promotions? What was your favorite sort of promotion connected to your films?

SAM: OATH OF GREEN BLOOD and THE BRIDES OF BLOOD wedding ring gimmick were

I had fun doing it.

STEVE: You had your hand in so many films over the years. How many films did you have a hand in?

STEVE: related to that you are listed as having done pretty much everything related to filmmaking. What do you see your ultimate role as? Producer? Writer Director?

SAM: I like to be remembered as a film buff and historian who got a break to work in it but my ultimate role was as a PRODUCER and DISTRIBUTOR.

STEVE: You only directed a couple of films, why didn't you direct more?

SAM: Because I appreciated the hard work Al Adamson did and preferred he tackle the difficult subject matter.

STEVE:  Were there any films that you were offered to be part of but which you turned down only to later regret the decision?

STEVE: Some of your contemporary producers like Roger Corman, had aspirations of making "art" films and this resulted in a number of films that no one watches any more. You on the other hand have made films that were always earnest and fun and are still being watched. Did you ever have dreams of invading the art house?

STEVE: Which of the films that you've been part of  were your favorites? What films do you not like?  Are there any you regret making?

SAM: BLAZING STEWARDESSES is my favorite because it was a satire of classic Westerns with classic  Hollywood actors.

STEVE: What films do you watch now? Are there any filmmakers who are impressing you now?

STEVE: Many of your films were not well liked by critics and some audience members. How did you handle people not liking the films you made?

SAM: It is an audience and critics right to like or dislike anything ... just as I have my opinions.   Our movies were successful and that was all that mattered.

STEVE: We're now 50 years on since many of your films were made. The films are still being shown and discovered  by new generations who are falling in love with them. At the same time the words of the critics who trashed your films have been lost to time. Does it please you that your films live on and your critics are gone?

SAM: It doesn't matter either way.  The films speak for themselves and reached their audience and still do via theatrical, home entertainment and the great American Drive-In.

STEVE I know that you are not going to make it to the Circle Drive-in, but I was wondering if there was anything you'd like to say to the people who are attending the screening?

SAM: Enjoy the show!  Buy something good at the concession stand, too.  Support The Circle Drive-In.