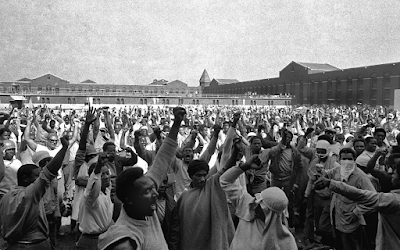 While there were a number of films premiering at Toronto this year the one film I wanted to see the most was the documentary ATTICA about the infamous riot that happened fifty years ago and still is reverberating through society. It is a tale that I don't think most people full grasp any more. Using the first person testimony of the prisoners, the observers and some of the National Guard, the film puts us into the prison when it all went to hell

A big note about the film, it is not focused on either the run up to or what happened after the riot. ATTICA is simply focused on the riot itself, pausing to explain things like how all the guards were white and came from generations of prison guards, as needed. I mention this because there was a point where I was curious when they were going to give some background on what happened.

Despite this ATTICA kicks serious ass. This is a film that lays out hat happened in great detail. Because so much of it was filmed and photographed we get to see how it all went down. More importantly in the end we get to see the and truly understand the carnage and hell the guards rained down on every one in the prison yard. I was  horrified.

My horror at what the film shows comes from my doing a paper on the uprising when I was in college about ten years after the fact. I was stuck using the books and periodicals I could get from the school library. I didn't have access to the images of the rivers of  blood, the footage of the prisoners being forced to crawl through the latrines or of the shot up bodies of the guards victims. I never fully understood the full level of evil visited on the prisoners.

This film is a masterpiece. Its a brilliant explanation of what happened over five days in 1971. I only wish that the film might have put things into context of what it all meant and how the uprising changed many things. Still as a recounting of what happened this film can't be beat.