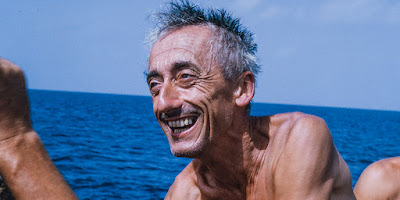 Jacques Cousteau is one of my boyhood heroes. I grew up watching his TV show and watching him on the TV talk shows. He opened my eyes to the world in ways you can not imagine. He along with Muhammad Ali were the two people I regret not meeting.

As you can imagine when I found out there was a documentary of the man I had to see it. Honestly I sooooooo had to see it it was the only reason I made a hole in my dance card to cover the Camden Film Festival.

Culled from hundreds of hours of film and video and hundreds more hours of audio BECOMING COUSTEAU is a film about the man in his own words and images. It does have the words of other people chiming in, but mostly this is all Cousteau.

I both loved this film and as disappointed. What I loved about the film was that the film brings us back into the world of the man himself. I never realized how much I missed listening to him talk about things until I saw this film. He was a man full of wonder and it bleeds off the screen. We also get a sense of how the TV nature documentaries we see today all come from him. If there was no Cousteau there would have been no Discovery Channel or Nat Geo. I love that we see how important he was to people in the 1970's. I also love that the documentary kind of takes the man to task for the bad things he did like working for big oil and killing many of the animals he was supposed to be studying.

What disappointed me was that the form and structure of the film is incredibly conventional. Yes Cousteau created the conventions, but he did it by destroying out previous notions of what the form could be. I was hoping for something that was magical in form, instead of by the numbers. Basically I wanted something as special as the man himself. And while what is here is choice I would have liked more fireworks.

Then again I suspect that had I seen this on the big screen I would have loved this unconditionally.