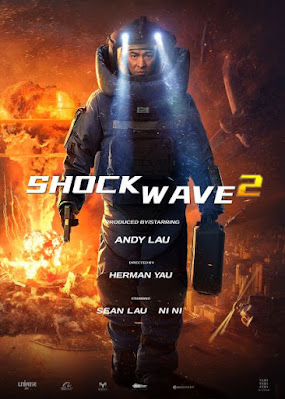 An retired bomb disposal expert is suspected of being part of a terrorist plot after being found near an attack. Unfortunately he has amnesia and barely remembers who is. However as his former colleagues race to stop a plot that will destroy Hong Kong Airport, our hero finds himself in the middle of things and he maybe the only person who can stop a catastrophic attack.

No that is not a spoiler since the film begins with a sequence that foreshadows the climax of this film.

Pure popcorn film is an entertaining action film that is completely unconnected to reality. Things happen in this film that could never happen, even if the real world was as heavily CGI as the one on screen.  Seriously I was watching sequences going “That’s really cool-but it could never happen”. This isn’t taxing it’s just eye candy.

If there is anything really wrong with the film is that it’s one of the many big budget “RAH RAH the authorities are the good guys” films that are coming out of China.  There is no blurring of the lines here. The authorities are most certainly the good guys- which kind of takes off the edge of the suspense. Sacrifices will be made but the bad guys aren’t going to win.

I was entertained, which is enough.