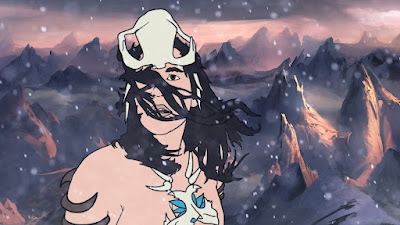 This is a throw back fantasy film that borrows Ralph Bakshi's style of rotoscoping, particularly his FIRE AND ICE which he made with his life long friend Frank Frazetta. It tells the centuries long tale of a power crazed librarian chasing the last flower of a powerful plant so he can have total dominance over the world. It's a film full of blood, violence, nudity and cryptic musings.

I've been chasing this film since it premiered this summer.  The film has always been one step ahead of me until earlier this week when I as given a chance to see the film.  I mention this because I know the quest effected my thoughts on the film. I know it wasn't until about a half an hour in that I was able to just see the film for itself.

As someone who grew up reading endless swords and sorcery books and stories THE SPINE OF THE NIGHT was familiar territory. I've read countless similar tales over the years. That is not a knock on the film, indeed part of the fun of the fun is trying work out what film or novel is being riffed where. If  the film is as loaded as I think it is someone could probably write a very long piece annotating everything. This is a film that is going to delight fans of the genre.

To be honest, as entertaining as the film is, the story is kind of unremarkable. It's what my aunt used to call much of the various genre novels she read, "random". What she meant was that its a story that is good, entertaining, but crafted in such a way that plot points were randomly pulled off the shelf. Yea, it makes for a good read, or in this case a good watch, but it never generates enough of its own personality to stand out. In this case the film feels like a blood relative of FIRE AND ICE, which would be fine, except that it  kind of randomly put together film simply because it allowed Bakshi and Frazetta to work together.  Outside of the graphic nudity and violence SPINE OF THE NIGHT never manages to stand on it's own legs, its just a familiar tale that seems like so many others. It doesn't help that the plot isn't particularly strong (the centuries long telling doesn't help) and there are times when things seem to angle toward nastiness, just because the directors wanted to have blood and severed limbs.

Again I was entertained  but I really was hoping for something more, say a hero I could really root for instead of one main bad guy and a rotating series of antagonists, or a more solid narrative through line.

Then again the film has flashes of brilliance in it. The order of librarians is intriguing. The arc of one of the "main" characters is unexpected. And there are some great lines and exchanges. There is much here to like.

For those who like fantasy films  SPINE OF NIGHT is definitely worth a look.