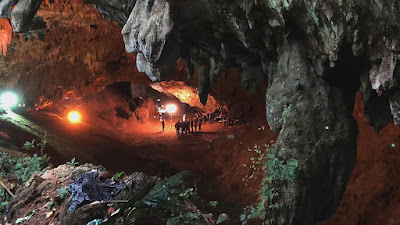 This is the story of the rescue of the 12 boys and their coach who were trapped for several in a cave in Thailand when it was flooded by monsoon rains. The focuses on the efforts of the international cave divers who came to help when it was determined that the skills they honed in their hobby, was exactly what was needed to help effect a rescue.

This mix of actual film of the events mixed with recreations is compelling viewing. It is actually one of the best thrillers of the year, despite the fact we ultimately knw how it's all going to come out. It remains compelling because not only does the film put us into the middle of everything  but also explains what a Herculean task the whole affair was. Over 5000 people were involved from many different countries and Thai agencies. It was something bigger than we could have imagined.

I loved this film. I knew how it would go and I was still on the edge of my seat. I love that we get to know the divers as people and not just guys who did this thing. For example the quote above is from one of the divers who wasn't good at sports and was left out of everything. Because we are given background on him, when he says the line towards the end of the film we can't hlp but laugh with delight knowing when it counted he was the one chosen.

It should be noted that the interviews in the film are limited to the divers themselves and a few Thai officials who don't have movie deals. It seems every one connected with the event has some sort of deal in the works which precludes them from speaking to anyone else about what happened. Even the footage of the boys in the cave comes from footage shot at the time and from TV news coverage. Clearly their is a hope that everyone is going to get rich. I suspect that won't happen with the market for versions of this story being small.

This is a great film. It was the source of repeated and loving discussion on the press line at the New York Film Festival. Everyone who was going to the press screenings at night (it did not screen at NYFF) was coming back glowing.  Now that I've seen it I can't stop talking about it either.

Currently in select theaters and on the festival circuit THE RESCUE is highly recommended. Look fo Oscar nominations.