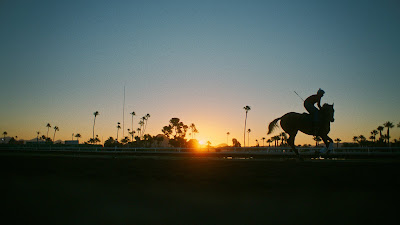 One of the best films at Sundance is also one of the most unheralded. JOCKEY is one of those great films that is going to find itself with a hard fought loyal audience who will be spreading the word because people just have to see it.

The film is the story of a jockey who is nearing the end of his career. His back is broken and the doctor say he has to stop or else. He of course keeps going spurred on by a new horse and a young man who may or may not be a long lost son.

There are many reasons the film works chief among them is the cast. Clifton Collins Jr gives one of those jaw dropping performances that makes you want to scream "where have you been all my life?" You feel every emotion in every line and gesture. It maybe one of the best performances I've ever seen simply because it feel like one of the most real.

Molly Parker is Collins' friend who has helped him keep going. Yea she has an angle but she also has a genuine feeling for him. Its a breakout performance.

Equally good is Moises Arias as the new jockey and possible son. He is a young buck unsure of what to do and he nails it. He makes us like him even if we don't know his motivations.

The script and direction are spot on. Never going for the high and the lows everything is perfectly modulated. While there was a couple of times where I got misty it was never not earned. I love that the film always remains focused on the characters with a horserace shot in such away that we know everything we need to know without seeing anything.

JOCKEY is a grand achievement and one of the best films of the early film year.