Nightcap 2/14/21: The passing of Christopher Plummer and a few Slamdance Notes,

The passing of Christopher Plummer saddened me deeply. He was and is one of my favorite actors.

I have no idea where I first notice him, was it the Pink Panther Sequel or was it the Silent Partner or somewhere else? I know it was as Kipling in The Man Who Would Be King

I know it wasn’t the Sound of Music since I never liked the film.

Plummer to me was always a joy. He was never bad even if he was in a bad film, you could always count on him. I mean he’s a shining spot in Nosferatu in Venice.

Plummer was perhaps my favorite Sherlock Holmes in Bob Clarke’s Murder By Decree. He was a human being not a machine. Most importantly he had genuine affection for James Mason’s Watson and you understood why they were friends.

He was in all sorts of films from serious productions to junk. I never could tell if he was in somethings because he was doing it for the money or because he thought he’s have fun. He always seemed to be having fun in the “lesser” films.

Twenty odd years ago when I got enough extra income that I could go to the theater the first play I went to was Barrymore with Plummer. I didn’t care about the subject so much as I cared about the man himself. Several years later I saw him in a static badly directed version of King Lear where he started totally insane and had nowhere to go. It was a terrible production but he was memorable. Years later I saw him in Inherit the Wind and I sat in the jury box on stage just so I could see him and Brian Denehy go toe to toe mere inches from my face.

For me he was a constant in the films and shows that marked the passage of time in my life. Now he is gone and I am not sure of how to mark time any more.

He was a great presence, a staggering actor and an influence on my life

He will be missed

Noting a couple of Sundance features that I am not doing  reviews for:

SLEEPING NEGRO is a confrontational piece of filmmaking. It's definitely worth a look for those interested.  I'm not going to write it up, not because there is anything wrong with it, but largely because this has the feel of a film that will have trolls appearing to take on anyone who doesn't like it completely and honestly this isn't a film I should be getting into an argument over. In retrospect, and in discussing the film online I find that my thoughts are such it needs more than I can give it right now. I will circle back on it. It is a better film than I had thought and my initial mixed feelings had more to do with the reaction to a review than my feelings for the film.

TEENAGE EMOTIONS is a film about being a high school kid in LA. I never connected with it and it's up close and personal style. I'm sure it will work for some but for me it just wasn't worth the effort to write it up to say I never connected to it.

I am watching a lot of the Slamdance shorts that are in the press library. I am attempting to write up as many as I can. I can not guarantee I will get to all of them.

That said I have seen and reviewed every film sent to me before the festival.

As Slamdance continues I'm struck by the need to ask you all to remind me never to two two huge festivals like Sundance and Slamdance back to back ever again. Too many films in too short a time with too much overlap. I am now shaking my head since I'm sliding into Film at Lincoln Center's not as big, but still exhaustive Rendez-Vous With French Cinema 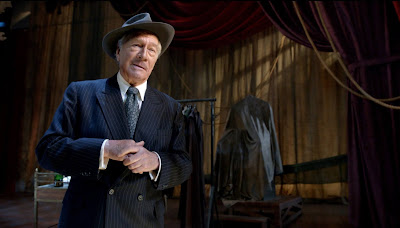