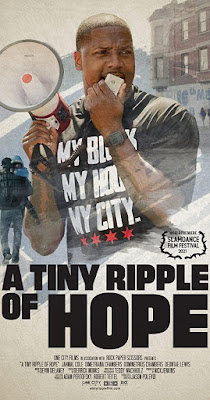 I was willing to see A TINY RIPPLE OF HOPE because it was playing Slamdance, but honestly my thinking was the last thing I needed was another manufactured feel good film abut a "wonderful human being" who is too good to be true...and then five minutes into the film I was thinking we may not need another feel good bio, but we certainly can use this bio of Jahmal Cole because, hyperbole aside, he is a man making a difference by just doing the right thing and we need that in an age when political expediency is wrecking the country and the world.
Cole is a young man who runs My Block My Hood My City which works with teenagers to get them out of trouble and on the road to living lives out of danger. Unfortunately Cole spends so much time helping other his marriage is imploding, he faces eviction and he is constantly in danger of something bad happening because he keeps stepping into harms way. As Cole points out at the start he'll help someone else shovel snow before doing his own walk.
TINY RIPPLE scores because it doesn't seem to be trying to sell Cole. We see him doing his thing with the result we seem to be getting a good look at the man himself. Too often films make the person at the center into a god or a better human being than they are. While Cole is certainly likeable, we also get sense that he can be a handful. That takes a bit of the shine off and makes him wonderfully relatable.
More importantly the film shows us the effect of Coles kindness and sense of right does for the community. We realize that what he is doing makes a difference and as a result we become more inclined to lean in and try to do something good as well.
An excellent portrait A TINY RIPPLE OF HOPE is recommended
Posted by Steve Kopian at February 13, 2021