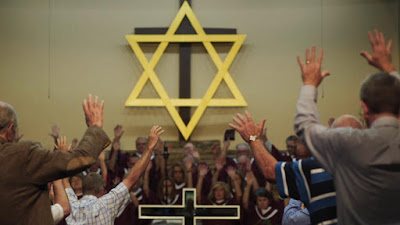 Deeply troubling look at the alliance between evangelical Christians in the US and groups in Israel linked to the Israeli government. As the Israelis take money for settlements and such in the name of Jewish/Christian brotherhood, the Israelis push for the evangelical agenda in Washington.

This film made me uneasy. It's not that Christians and Jews shouldn't get along, but more that the end games they are working for are kind of polar opposites. The Israelis want a strong country and the evangelicals want the second coming which means the end of Israel and the conversion or death of the Jewish people (a fact that is pointed out in the film). Outside of supposedly getting their agenda carried out by any means necessary they are really working with people working against them. I know everyone sees it but no one really talks about it, which makes a late in the game talk between an evangelical and a priest in Israel highlighting the differences rather uncomfortable.

I'm truly not certain what I think of all of this. I am deeply bothered by it, largely because I think at some point this can't end well. I'm also a bit saddened by it since the film begins with a pastor talking about how people in Applicachia are looked down upon and then the film does look down upon them and their end days view of the world. We kind of see them taken advantage of by people who want things from them being a vote or money.

There is much to unpack and think about, and frankly I need to see the film again because there is great deal that the film is trying to say.

If you want a heady discussion of religion and political agendas this film is for you.