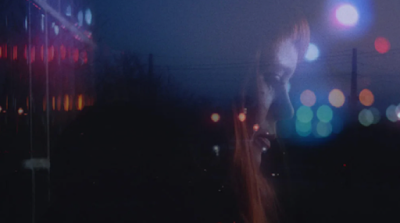 Two scientists pick up where their colleague left off. Supposedly he had taped a weird sound coming from space.  As they begin to investigate they find their sense of time, reality and self deeply disturbed.

I hate it when the title of a film clues you in to how the film is . The key word here is yawn., this film is a snoozer. Full of long almost static shots where nothing much happens. You'll get the idea in the opening minutes as the camera first focuses on the landscape and then it goes to people just standing on a porch... for a long time. Later we get long passages where the characters read the notebooks out loud. I drifted off.

What kills me is this film looks good. It has the look and feel of a number of inde horror and science fiction films from the late 1970's and 80's that I grew up on. The ideas are actually really good, and in another film it would have been killer. The trouble is this film is inert and and it doesn't do anything other than look good.

I can't recommend this film.