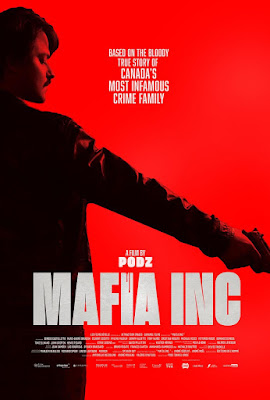 I'm trying to figure out how the hell this epic crime drama is off most people's radar. The continent spanning tale is based on a true story, which according to somethings I read on the film, as altered because to tell it anything close to straight and with the real names would have resulted in bad things happening. I have no idea if its true but I'd like to think it's true.

I'm going to briefly, and very incompletely, tell you what the plot is.  This is the story of two families. One is the Paterno family, the head of the Montreal mafia. They are working on any number of schemes including getting funding for a bridge from Sicily to Italy. The other family is the Gamach family. They have been the tailors for the Paternos and the mob for generations. However Vince has left the fold and gone to work for the Paternos. Willing to do what it takes to get things done he devises a horrifting way to ship drugs into the country.  As Vince rises up the ranks friction is created all around and nothing is going to end well.

This is one of the best crime films in a long time. A huge cast sells the tale  in such a way that you fall into the film and are sucked along. Feeling much shorter than it two hour twenty three minutes this is a film that covers lots of ground (at least three continents), has huge cast and a detailed plot (way more is going on than I explained above) yet never ever manages to make you wonder if you missed anything. It was so nice not to feel like I should stop and replay something.

To be honest the best thing about this film is that I wanted to call all my mafia movie loving friends and relatives and tell them they had to see this. Comparable in an extremely favorable way to the GODFATHERS and Scorsese's mob films this is the sort of crime epic that is wonderfully it's own thing. It carves out a crime story like what Hollywood has done but is different.

A word of warning, while not overly graphic the film is violent and ugly. There are several set pieces that will leave you talking to the screen.

This is an absolute winner and a film you are going to want to revisit.