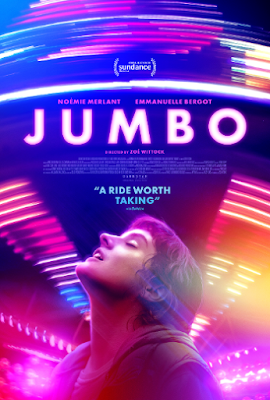 JUMBO is the name a young woman gives the new ride at the amusement park where she works. She works to night shift and spend the after hours cleaning. At some point she notices that the ride is trying to signal her with its lights. She goes over to it and soon a romance blossoms.

I have been chasing JUMBO for a year. Last year at Sundance it was a film that a large number of my friends were talking madly about. This was "one of the best films of the year" and I had to see it because I love off kilter films. Because the Covid nonsense wrecked  the release and festival schedules I seemed to miss it at every turn. However with the film hitting virtual cinemas I have finally caught with it.

In all honestly, I love the cast. I love the script. I love the filmmaking and I really like the movie.... the trouble is I never bought the central premise. For better or worse its the one thing the film never really does is make us believe. There doesn't seem to be any reason, there is no AH HA moment suddenly they come together and they are in love. Its kind of a given. Normally according to Raymond Chandler an artist can ask us to believe one impossible thing without the story collapsing. The trouble is that doesn't work when it's the central premise of your film. You have to believe  from start to finiah. That doesn't happen here.

Honestly I have been mulling this point over in my head for the week since I saw the film. What would have made it work? To my mind the only way would have been if the romance happened off screen. If we didn't see it happen then we could have filled in the details, but here there simply isn't enough meat for it to work.

That said, assuming you can just say to heck with it and go along, this is a great film. I love the characters and the interactions. I love the visual sense of the film and I am looking forward to what Zoe Wittock does next because she definitely has the stuff to make a great film next time.