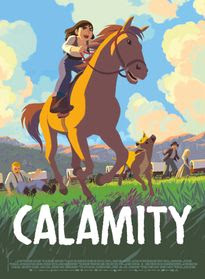 Remi Chaye's follow up to his classic LONG WAY NORTH is a look at a young Calamity Jane. On the wagon train to the west Jane's  unconventionality rubs everyone the wrong way, When she is accused of being a thief she runs away to prove her innocence.

This is decidedly a Euro-western. It doesn't feel like a film made in the US and we are better for it. And even though it feels like a European take on the American west the the film doesn't feel like a spaghetti western but more the early German westerns about Shatterhand that lead into the spaghettis. The closest American film would have been the wagon train sequence in the Coen Brothers' BUSTER SCRUGGS film.

Though honestly arguing what sort of western this reminds me of is kind of pointless since the western setting is less important than the fact this is simply a tale about a young girl finding her place in the world. Martha, soon to be Jane, simply is going out to right a wrong and prove to the world who she is. Its a solid tale that many young women, and even young men should see.

The visuals are stunning and I love that director Remi Chaye is developing his own path visually and storywise.