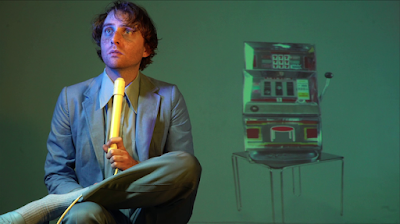 Off kilter, self-depreciating and very mannered Man Under Table is either a film you either click with or you don’t. It’s a film that is very hard trying to be something quirky and whether that works for you is something I can’t guess.

For me it was a struggle from the get go. The instant that I saw two guys staring at each other in respirators in a mens room  just breathing at each other I kind of stepped back. The fact that Guy was so high strung and needed to be medicated didn’t win the film any points either. I know it’s a reaction to the world around him but then again no one is nuts as our hero.

And that’s a big problem for me with any film, you can’t give me someone I totally hate from the first frame. If there isn’t something I connect to I turn off. I hated Guy and found his fumblings increasingly stupid. I wanted to smack the living shit out of him.

The rest of the film is actually quite good, unfortunately we are focused on the worst part.

Some people may like the mannered comedy, I didn't