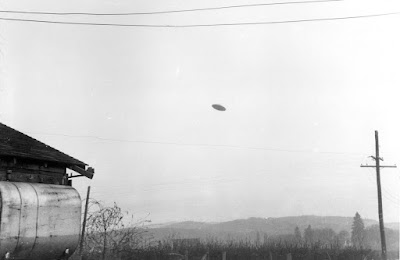 I've been putting on news reports and books on tape to help me  fall asleep. Some things help me fall asleep better than others.

One of the things that put me out is Donald Keyhoe's The Flying Saucer's Are Real. Written in the early days of the UFO wave originally as an article in True Magazine, Keyhoe essentially destroys the government case against there being anything going on. Keyhoe's method is simply to use the various government press releases against itself as well as deal with the largely forgotten case of Captain Thomas Mantell.

Thomas Mantell was a pilot who was killed when his plane crashed while he was chasing a huge flying disc. The disc was seen by hundreds of people, however no one knows exactly what happened since Mantell went into a cloud and then plummeted to earth. Rumors flew that his body was riddled with bullets, that he was destroyed by a ray, that he had simply blacked out by climbing too high. The government initially said it was all a mistake sine he was chasing Venus. The trouble was was it was almost  too dim to actually see and very small. Several years later they realized the mistake and changed their story. That may have calmed the public but his death didn't sit well with military people who knew or knew of Mantell and they knew he was a good enough pilot that that he was chasing almost certainly chasing something. As Keyhoe said several people said they thought UFOs were a joke until Mantell was killed.

The reason I'm bringing this up, beyond the fact that the book is a hell of a read and the Librivox recording of it is fantastic.(It can be found here or here), is that in this day and age of fake news and changing stories, Donald Keyhoe's story of trying to find the truth about what is going on is one we need to see. Keyhoe wades into the fray and searches for the truth with open eyes and a burning desire to find out what lies beyond the bullshit.

What I find interesting about the book, which is almost 70 years old is that the battle for truth hasn't changed. I originally read Keyhoe's book decades ago when I was first interested in UFOs. It was a classic and required reading.  I only picked it up as an audio recording because I wanted to hear something that I knew and wouldn't be taxing. Somewhere along the way I suddenly realized how the lessons Keyhoe was presenting, beyond the UFOs , was really relevant for today.

If you want proof consider that today we have politicians both Republican and Democrat who are trying to change the stories that they themselves are telling. The GOP is trying to turn the recent insurrection into something different than what it was and their stories are changing. Meanwhile our new President is already dropping his promises or now saying that what he meant was something other than he said. No is really taking everyone to task because everyone in the media has an agenda because that agenda is what gets them viewers.

The quest for viewership and the money made from advertising is killing truth, breaking apart families and destroying the country. We need to hold these people accountable by showing them their words and making them own up to them.

If not we are doomed.

Read Keyhoes book or listen to the audio recording and watch how chasing the truth nudges us toward a better reality.

Rendez-Vous With French Cinema and the New York International Children's Film Festival start this week. I will have curtain raisers for both in the next couple of days