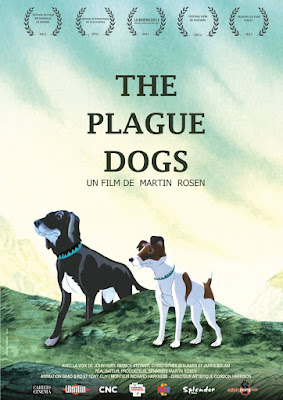 A companion piece to director Martin Rosen's adaption of WATERSHIP DOWN is another realistic animated film about two dogs who escape from a medical testing facility. However because they are potentially carriers of bubonic plague the humans begin to hunt them.

A hidden masterpiece. This is a film that most animation fans I know haven't seen. The reason is not that the film has anything wrong with it, rather it is the work for adults. It is a heartbreaking tale with blood, cruelty and sadness. Consider the fact it is based on an anti-vivisection tale. Honestly children would get nightmares. I know back when it came out animation in America was seen as a only a children's medium so they wouldn't play it. It had to stay in the limits of the art houses and as a result got lost.

I absolutely love this film but I almost never watch it because it wrecks me terribly. (That is a rave)

Highly recommended the film is playing at Animation First which starts today.