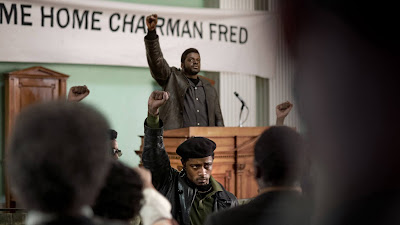 This is the story of the death of Fred Hampton the head of the Black Panther Party after he was betrayed by William O'Neil.

Daniel Kaluuya and Lakeith Stanfield star as the two leads and they are absolutely wonderful. I fully expect them to get a boatload of awards for their work.

As for the rest of the film it never quite made the impact I think it should have.

For me the problem with the film comes from the way Hampton and O'Neil are handled. To me they came off more as mythic figures rather than men. There is a reverence for the men and a desire to make the tale  a mythic one that prevented me from connecting. He really does seem like the messiah of the title and not the man I have seen in the footage I've seen of him speaking.

This is not to say that the film is bad, it is not. However I have been living with this film as a probable front runner for the Oscar for the last few months and the expectation for a truly great film was high. Honestly it didn't live up to the hype and I just don't see it. It's good but it's not that good.