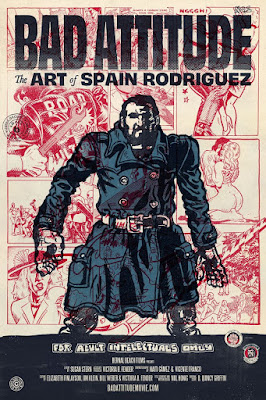 This is a portrait of legendary underground comix artist Spain Rodriguez made by his wife. It is told by his friends, family, admirers and in archival interviews the man himself. It is full of art and history and life and is easily one of the best films of Slamdance and probably of the year as well.
There is so much to love about the film from the art, to the stories to the wonderful sense of life. However what I love about the film is the sense of history. Within the run time of the film we get a portrait of the last  eighty years. Spain lived a long rebellious life where he was part of the changes that came in the wake of the 1960's where what constituted comic art changed, the sexual revolution happened, the women's liberation movement occurred, and the universe changed. Spain was always pushing the limits of himself and everyone around him with the result he instigated changes that rattled the pillars of heaven.
How good is this film? Half way into the film I paused it and emailed a bunch of my fiends to tell them they had to see this. It wasn't just film friends but also comics lovers as well.
If you love comics or art or a hell of a good tale this film is an absolute must see.
Posted by Steve Kopian at February 12, 2021