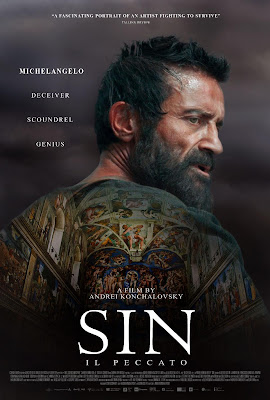 Andre Konchalovskiy's look at Michelangelo is a messy affair . A look at the man trapped between the shifting political power f the families controlling the papacy, the film doesn't always seem to know what it is shooting for.

Give Konchalovskiy points for giving us a complex Michelangelo, but his attempt at revealing the mental and physical minefield that scarred the great artist isn't always satisfying. The problem is that in order to tell the story the way he wants it told he leans into things being more visceral rather than clear. We can feel Michelangelo confusion at all of the things going on around him as well as the inner demons welling up inside him but things aren't always clear. More than once I felt like I was missing some detail that would put it all together. There were times when I felt some bit or other was lost.

I do love the fact that Konchalovskiy gives his film a lived in quality. Things aren't Hollywood perfect, its dank and imperfect. Places feel lived in Some costumes are ill fitting. There is a sense of life outside of the image.

Cheers to Alberto Testoni as Michelangelo. His is a great performance that stands apart from every other cinematic portrait I've seen. His is a tortured individual wrestling with himself, the world and finally God. He is a man bent and twisted by  life and his work. The result is a performance that is all out there and deeply affecting.

While I found the film uneven, I still recommend it. There are moments of great power in the film, additionally Testoni's performance is a great one, possibly one of the best you'll see all year, and it is one that is worth your time to witness.