SKI BUM THE WARREN MILLER STORY is now on Discovery + 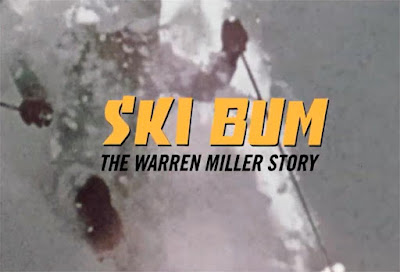 The Opening Night Film of Slamdance 2019 was the portrait of the late great Warren Miller who not only changed sports filmmaking but was responsible for the rise in skiing across America.

Using the last interview Miller gave before his death in 2018 as the backbone, SKI BUM is the life of Miller from start to finish. Along the way we witness his discovery of skiing as well as his fascination with making ski films- which he schlepped across the country on barnstorming tours every winter. It is filled with interviews with friends, family and admirers who add details and explain how Miller changed the  world.

If you've never seen any on Miller's films you should make an effort to see this because it will give you a really good idea as to why he had such a big fan base and how he influenced everyone who came after him. Filled with seemingly endless ski footage, some of which hasn't been really seen in years because some of Miller's earlier films are hard to come by, SKI BUM will make you ooo and ah for much of it's 90+ minutes. The footage is simply that stunning, even if you've seen some of it before. (The ability to stand up to repeated viewings is what made Miller's films so special.)

Unfortunately there is a point about half way in where there are sections where things really aren't as interesting as what went before. Some of it seems repetitious and some of the talk about Miller's film business or differences in the way the films are made today isn't as interesting as what had gone before. Its not fatal but it does kind of take a little bit of the sheen off the film.

Regardless this film is a must especially if you are a fan of Miller's films or if you've never seen them.

Almost certain to have both a long festival life and long commercial run SKI BUM: THE WARREN MILLER STORY is recommended.
Posted by Steve Kopian at February 25, 2021