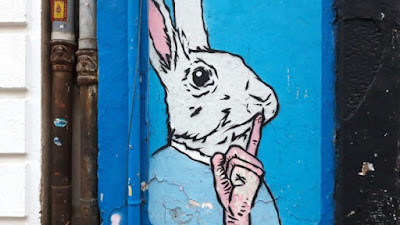 One of the greatest pieces of editing I've ever run across. A film about street art and how it sees us is as good as filmmaking gets.

The film is a series of images of street art in Valencia. They are cut together in such a way that while we are looking at pictures of art all over the city they come together to create a kind of animation. And because the film begins with an epigram about the eyes in art looking at us we get the sense that it is all watching us. It is this sense that the film is watching us as we watch us that makes it even more alive than it already it.

No question one of the most amazing films I've ever seen. While I have seen similar films that have put art together, I have never seen one that worked this well. I suspect that the fact that much of the art is paste up art of the same image in various location is what makes this work so well. (as well as shooting them from different distances and a perfect score). Additionally the whole premise behind it all forces us to just engage a little bit more and see it as more than just a straight documentary but a conversation.

My jaw was hanging open and I was rewatching sections of this over and over again.

One of the best films of the festival and the year,