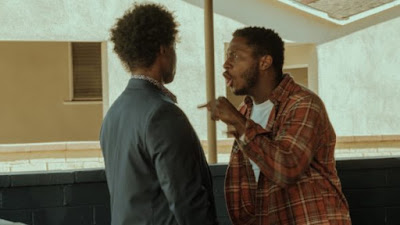 I suspect I am going to be crashing into this film for years to come. In all seriousness I suspect that I will be wrestling with THE SLEEPING NEGRO from this point on. I've already been wrestling with it off and on in the two weeks or so since I first saw it.

The film is the story of an angry black man (writer director Skinner Myers) who is adrift in his life. He is angry at the world and pained by what it is doing to him and making him do. Society sees him as a menace. His boss wants him to cook the books to close a big deal. His girlfriend isn't as loving as he thought. He struggles to retain his humanity even as life fills him with rage. What is he suppose to do?

My initial reaction to the film was to step away. This is a very confrontational film. It is a pained scream into the dark about life and the way it treats African Americans. I wasn't certain what I thought of the film, and because this is a confrontational world I decided not to review the film since I was afraid that someone would take offense at whatever I said about the film.

However over time and as of the result of a discussion with a friend about Slamdance films where I gushed about all of the the good things the film was doing on a visceral level, I realized that I had to give the film another go and to write it up.

While I can argue with some of the artistic choices writer director Skinner Myers made in putting the film together I can't argue with the emotional punch the film delivers. This is a film that hits you in the gut and forces you to engage with it on emotional and intellectual levels. Whether you like the film or hate it this is a film you have to take head on because it not only has a lot to say but it is also a film that has a lot to make you feel, really feel, much of it conflicting. It is a film that will make you feel uncomfortable in your own skin.

Yes, the film is a pained scream about race and the politics attached to it as well, Yes the film attempts to make audiences, regardless of racial background, feel the anger Myers' character is feeling but he also forces us to feel the brokenness of the emotions beyond anger. Myers' never wants us to forget or stop feeling that the rage is coming from a place of pain and of humanity. Through it all Myers is struggling to be a person and not fly off the handle despite what is happening to him. He swallows the pain. It's a towering performance of small gestures, shifted body weight and eye movements that keeps things real and in the moment, as if he is reacting to a situation he has just come upon and not written out. I only realized how good it was on a second viewing because it looks like Myers isn't doing anything.  The result  of it all is he and we are never allowed to simply give ourselves over to a cathartic explosion that would release the emotions. Myers instead tethers it to other emotions such as confusion, uncertainty and sadness. His character is also painfully aware of what the people around him are feeling and what exploding in a situation would do. We never fully get a release  of the anger because it is never one emotion but many. Nothing is black and white or gray, but multi-colored.

Because Myers keeps it so amazingly complex his film becomes something greater than if this was just a blind scream into the void. Myers has created a character who is much more like us than any one in any other similar film because he is always coloring what he and we are feeling to make it more like real life. It is the complexity that is what makes this film a glorious challenge to get a handle on. More so than most filmmakers making films about race and related subjects Skinner Myers understands that life, unlike the movies, in not just one thing. Everything is bundled up together. We can not simply be one thing because we are many all at once. By presenting his character as feeling many things in key moments we are forced to really ponder what the film is trying to show us. It transcends what a typical Hollywood portrayal would be and becomes a living film.

For me seeing the film the first time I didn't know how to handle the complexity of what I was seeing. Its not a simple "well it isn't Hollywood therefore I'm confused." Rather this was a "This film is not going to sugar coat anything or dumb it down. It is going to show the complexity of real life". No one, not even the great masters, did that. Or no one did until Skinner Myers.

I am in awe of the emotional punch this film produces. As I said I have been haunted by this film for weeks  turning it over in my head and in conversations. I can't let the film go no matter how hard I try.

Do I think you will like the film? I don't know. Frankly I don't know how I feel about it. However as a living, breathing vital discussion of race and related matters the film is something that you have to see. This is a film that will produce a reaction, for good or bad. Not only will it will make you feel, it will make you think about things in ways you probably haven't done so before. When a film does that, when it produces a reaction as strongly as this one does, it is the not only a great work of art but the calling card of a great filmmaker.