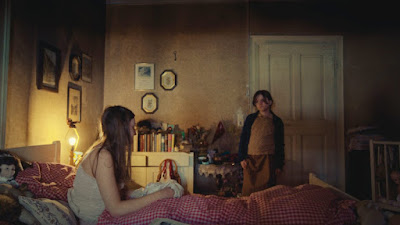 Observational horror film (of sorts) is one part exercise in uncomfortableness and one part art film It is the story of a young girl over a ten year period. She is living with her parents in a form of isolation. No one from the outside world is allowed in. Over time pain becomes mixed with pleasure and her view of the world warps.

Told in a series of static shots this is not a classical narrative but a series of moments. Its a style that forces us to engage and be in the room. The result is not jump scare but horror but terror of a broken life and a warping of the soul. I was genuinely horrified but never scared.

This is not a film for every one. This is very much an art film (I could have seen this playing at the New York Film Festival). The pacing is slow, like life. It builds and builds but there is no release. The result for those who click with it is a deeply disturbing film that you can't shake.

Is it worth seeing. Most definitely. It's often a creepy little tale that will get under your skin.