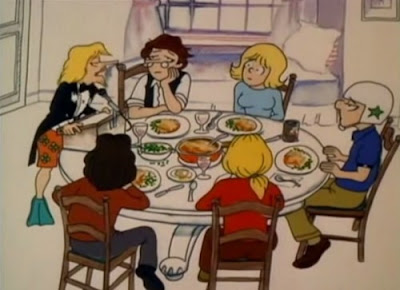 Garry Trudeau  hooks up with Faith and John Hubley for an animated short film of his classic  comic strip. The film has the crew looking back on their lives.

Beautifully animated the film is a time capsule of when it was made. It's a film that could be done now, partly because its the work of the Hubley's who have since passed on, but also because no one would probably actually try to animate a strip like Doonesbury.

The film is a solid 20 minutes that show us the characters in a form that will delight fans of the strip and work for those who have never seen it. I remember when this film came out many people worried if it would date, and amazingly it hasn't.

What struck me about seeing the film for the first time decades is the animation itself. The Hubleys always turned out works of art, but this is something special as it uses well known characters and turns them into something special. Animators working today should take a look at the Hubley's work here and elsewhere to make their work today something that is unique.