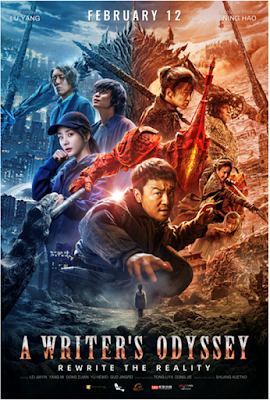 A WRITER’S ODYSSEY is a mess. It is visually spectacular and possesses some kick ass action sequences but the story is a mess.

The plot as something to do with all sorts of lives linked by a novel. One man who is trying to find his daughter is dreaming it, another man who is unconnected to him is writing it, a third man who runs a multinational country is affected by what happens to a certain character in the story. There are other characters who have super powers. The film bounces between the real world and that of the novel. Everyone is waiting for the end of the story because, if nothing else the one man may actually find his missing daughter.

If that sounds tentative that's because I'm not really certain of how it all fits together. The fantasy stuff  actually has a through line of a hero trying to avenge the death of his family at the hands of a man trying to become a god. Its a plot line that more or less follows classic plotting. The trouble is the real world stuff never really makes a lot of sense. The rules keep changing and things seem to happen just to get the plot to go. Worst of all the ending doesn't pay off in actuality, but rather things are implied thus removing the emotional crescendo to a 130 minute trip.

If you are going to try A WRITER'S ODYSSEY, and I suggest you do, kind of let the real world stuff wash over you and stick with the fantasy stuff. Full of wickedly cool action set pieces and magnificent monsters it's such an eyeful I wish I had been able to see on a big screen. To be certain the effects are uneven but the film's heart is in the right place with the result you will go with it anywhere.

A WRITER'S ODYSSEY is currently in select theaters and Drive-ins