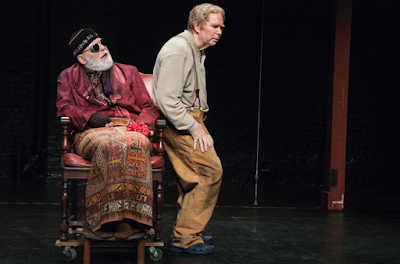 Dan Moran and Chris Jones are two New York actors who have developed Parkinson's Disease. Unsure how much longer they will be able to continue performing they embark on a production of Samuel Beckett's Endgame for what may be their last time before an audience.

Haunting and hopeful, with more than a touch of bittersweetness ME TO PLAY is one of my early favorites of Slamdance. Watching the film I was reminded of the struggles of friends and relatives with their own and their relatives battles with the awful disease. Watching the men shuffle through their days broke my heart because the film makes clear what the disease does not only to the person afflicted but also the people around them.

That last bit is responsible for one of my favorite bits in the film when I believe it's Dan's wife expressed her displeasure at Michael J Fox and his family for making the course f the disease seem like shiny happy bunny farts. Her wish was to be more like Mother Teresa in handling her husband's illness but that isn't possible since it is kicking the shit out of her too. It's a towering moment, not couched in anything but emotion that lets people know it's sucks to be a caregiver some time and that brave face isn't always possible.

This is a marvelous portrait of two men struggling to keep doing what they love, and if this it is the end for them it's a good way to go out. God bless them both and their families.

I really loved this film. And I really am bummed I didn't get to see the production of Endgame.