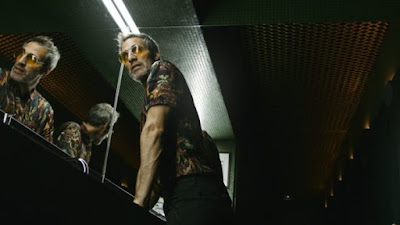 This is a film about a man haunted by artist Richard Weismann. He was some one that art collector Martin Solo had collected but had never promoted properly and now has huge regrets over. As a result now that he is opening his private museum up to the public he is pushing his latest favorite Mu Pan.

This film is a portrait of artist Pan,  collector Solo and the art world itself. Its an exploration of how so much art is being created and ending up in private collections, museums and storage facilities and not seen by anyone. As Solo says at one part art needs to be seen and confronted not locked away.

This is a breezy hour long film that probably could have been a little longer. Say what you will this film moves a little too much like the wind with the result that I was glad I was watching this at home because I could stop the film and really look at some of the art that blew by. It also allowed me to take rewind and catch one or two things I thought I missed. (Sorry I was looking too hard at some of the spectacular art I tuned out some of the words)

As someone who gets flooded with art docs every year, and who can be picky as a result, I had a blast with this film. I love when a film opens up my eyes to work I’ve never seen before and also peels back the layers of a subject I thought I knew. EVERYBODY does that with the art world and I think I’m better for it.

This is a wonderful film. Recommended to anyone who loves art or just a great doc