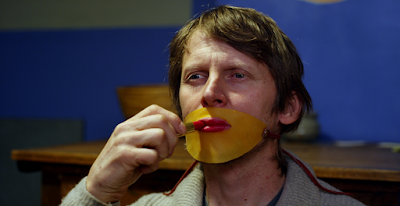 People taking a de-escalation course return to their lives and try to make sense of it all.

The story behind the film is that de-escalation workers in Minneapolis  did a theater exercise to deal with their fears and put a film together, finishing up in the days before the murder of George Floyd.

I went into the film thinking it was going to be a story about de-escalation workers and instead found it was a complex story of people trying to get by. I was so thrown off that after initially watching a half an hour I stopped the film went away for a few days and then came back to it to see it on its own terms. The result was a much richer experience.

The film is simply everyone we meet at the start lives over a period of time. Some of the characters crisscross through other characters' lives some are more or less on their own. For much of the early going this feels like a documentary, with the only clue that it is not is how close the camera gets to the characters at times.

This is a real, raw and incredibly intimate look at life. We are into the lives of these characters in ways that most other inde films only wish they manage. There seems to be no censoring with anyone and it's all on the table. I dare some one like Meryl Streep to be this open with her life. Words fall out of the characters mouths in ways that no trained actor would try with the result we are closer to life than in any purely scripted film. The characters/actors are naked on screen in every way possible.

The result is we fall into the film and into the lives of everyone on screen and they become friends.

While some of the sections are better than others we are never not engaged. We are there living the lives of these people and we are made better for it.

If I were to quibble with the film I might say that it is a little long at 127 minutes but then again I wouldn't cut a frame.

Recommended, especially for anyone who has ever said they like inde films because they bring you closer to real life.