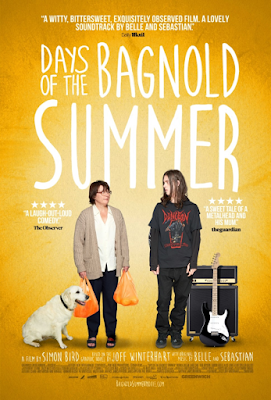 I suspect that a certain amount of uncertainty on the part of publicity people to know which audience to sell this film to has kept DAYS OF THE BAGNOLD SUMMER off American shores for almost two years. No matter it hits VOD on Friday and is worth your time.

Based on Joff Winterhart's award winning graphic novel the film charts the course of a mother and  son in England after the son's planned trip to the United States t stay with his dad is canceled. Mom is a fiftyish librarian who is slightly socially awkward and her son is a 15 year old wanna be metal musician with only one friend. They have very little in common despite living in the same house.

From a marketing stand point I kind of feel for the studios. Here is a film that is actually about both it's characters as real people, that while humorous, is never cruel and always real. This is a small gem about people we like and know trying to get a long and find a common ground. It isn't big and bold, splashy or smart ass, its more like life but with more smiles.

Going into the film I didn't know what to think of the film. I had watched the trailer but I couldn't get a real sense of what the film was. It didn't seem to be fitting into the prejudicial slots that we all have about material. It wasn't until I was about a third of the way into the film that I fully gave myself over to it and just let it do what it was going to do that I understood what a gem this is.

This is a small gem and is recommended