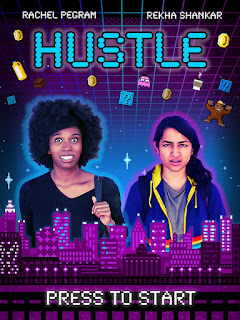 Life of two friends in New York set up as if it's a video game. One is in TV the other in publishing.

Amusing web series gets better the more episodes you see. I think the reason it works better later on is some of the video game/Scott Pilgrim sort of take on things starts to fall away and the series begins to work based on the characters and situations and not the quirks.

To be perfectly honest I would like to see the series reinvented as something straighter, with out the quirks, without the asides. The writing is good. The leads are likable. It doesn't need to be as silly as this is because the material is strong enough with out it.