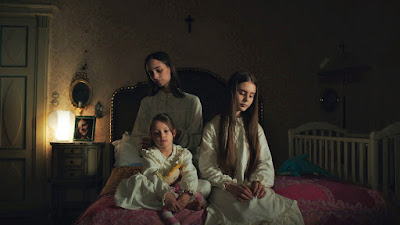 A very religious father keeps his three daughters locked inside their house. He has told them the sun has destroyed much of the world and they can not go out lest they be consumed by the violence that is rampant in what is left of society.

Moments of great power kind of get lost in a tale that doesn't really work. Part of the problem is we  can guess where this is going, and it's no secret that the father isn't being truthful. However that would have not been a problem if the film had some sort of internal consistency. Too many times I wanted to stop the film and ask why something was happening since it didn't seem to fit with other bits.

However, as I said the film has a lot of great moments, and even a good ending, which make me want to revisit the film down the road even if I was disappointed.