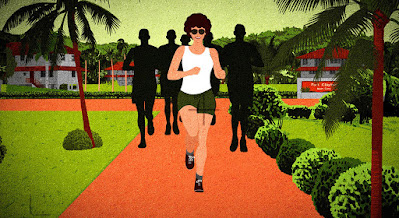 God bless Animation First for running episodes from this magnificent  series. I have no idea how many episodes there be will total but I need them all as soon as possible.

Not to put too fine a point on it the three episodes of the series running at the fest are great. The series has a journalist interview female spies about their real life jobs in espionage. Its a blast that highlights both the boredom and the excitement of the job.

Guinevere is the opener and it introduces us to our host who explains how she came to interview the women. It also tells the story of one of the first women to work tracking Soviet spies during the cold war. It actually sets the stage for the other stories.

Martha is the story of an American spy who is married to her job. She relates the story of the hunt for Manuel Noriega in Panama and how she ended up getting him to surrender.

Yola is the tale of a Mossad agent who smuggled Jews out of Africa over three years.

The stories are all compelling and by the time the last episode ends you'll want more. Frankly the only thing wrong with the series is that the episodes only run six minutes so you can't curl up and get lost in them. If someone was smart they would turn them into features or hour long episodes.

An absolute must and one of the highlights of Animation First

The wonderful press office of the festival arranged for me to see the three remaining episodes in French (which is not my language) and they are just as good as the three I saw. While they are not playing at the festival I am going to mention them in case you were curious about the rest of the series.

Gabriele is the story of a Stasi spy