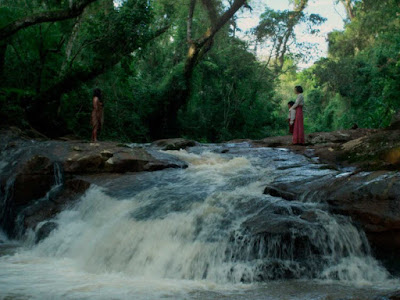 Told in an out of order style THE RETURNED is the story of a young woman who makes a deal with a local deity  to bring back her dead child. There is a price and unexpected consequences...

Requiring that you work with it, as well as be willing to watch a film that isn't a full on horror film THE RETURNED will be a chilly delight for those who want more than just a jump scare. This is a film that has more than just fright on it's mind and it uses its running time to ponder not only the monsters of nature but the beast that is man, especially the one that has colonialism in his heart. The monster isn't just the one in the jungle, but the walking into it.

I reading on the film after the fact I discovered that some people didn't like the jumbled narrative.  I was a little hesitant at first but then it grew on me because I realized I began to lean into the film more than I would have otherwise. I wanted to see how the pieces tied together.

While fans of big and loud blood soaked films will be disappointed, anyone wanting a thoughtful film that gets under your skin will be delighted.