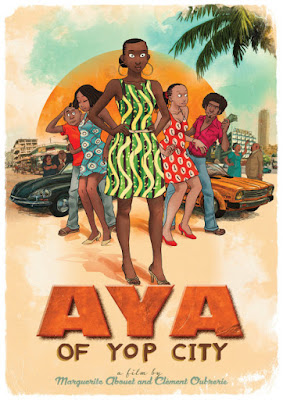 Based on a graphic novel by director Marguerite  Abouet AYA OF YOP CITY is the story of 19 year old Aya who wants to be a doctor. Her friends just want to dang out, dance, and be with the cute guys. When one of Aya's friends becomes pregnant everyone's lives becomes complicated

Bouncy and alive AYA is wonderful. Driven forward by a killer soundtrack the film is a charming soap opera.  I wasn't sure I wanted to see the film at first, but did so because it was playing at Animation First, but five minutes into the film I was smiling from ear to ear. Getting to find a wonderful little gem like this.

While not for little kids, the older kids and adults are going to love this gem of a film. I loved this film enough I'm looking forward to getting the graphic novels.