King and The Mockingbird Animation First 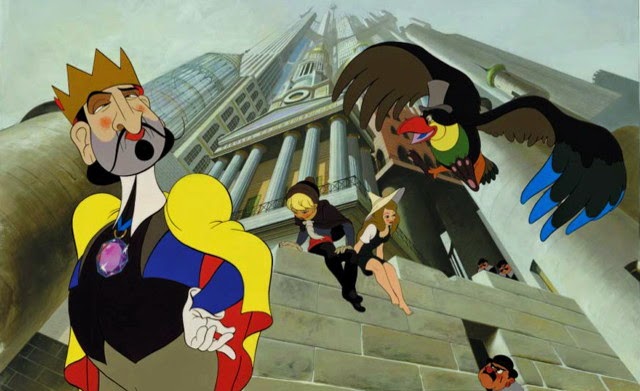 I first was made aware of the film via public domain VHS video tapes in the dump bin which carried the title The Curious Adventures of Mr Wonderbird. The film was in English with Peter Ustinov doing the narration and voices. It was a great looking film but kind of dramatically inert. It just didn’t work.

I then went back to the film after reading on it’s tragic history-It was directed by Paul Grimault who had the film pulled away from him and finished by others, then 30 years on he got the film back, chopped out about a third of what was there and put it back the way he intended it to be. I would occasionally revisit the film in the hope that I could see what all the shouting was about but sadly all I had was the crappy Ustinov version to go by. (Wikipedia on the film's history is here)

When the New York Film Festival announced that not only would they be screening the 1979 director lead reconstruction in the version that Gamut restored last year I jumped at the chance to see it. Finally I would get a chance to see the film in all its glory and the way it was intended to be seen.

My thoughts? It’s a wonderful film. 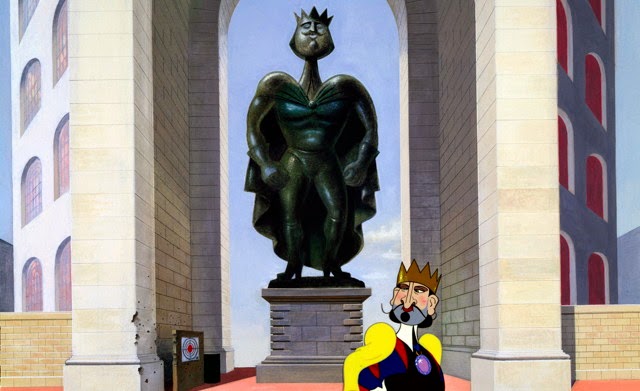 Based on the story of The Shepherdess and the Chimney Sweep by Hans Christian Andersen, the film tells the story of the kingdom of Tachycardia where the disliked King Charles V + III = VIII + VIII = XVI rules the land. One night while he’s asleep the a painting of the king falls in love with a painting of the shepherdess, unfortunately she loves a Chimney sweep. The characters all break out into the real world, with the painted king usurping the throne of his real world counterpart. A grand chase goes on as the king chases down the shepherdess so he can marry her, because as they say that’s what happens in the stories. Helping the lovers is a mockingbird who hates the king in any form.

The film in the director approved version is great fun. Essentially a surreal chase as the king and his police force chase the lovers, the film has these wonderful weird moments as the police ride fish boats through canals, lions are calmed by music, people fall through trap doors and a giant robot wrecks everything. It’s like an artistic Looney Tunes cartoon with acid flashback moments. Once things are set in motion the film just goes straight on to the end without the trouble of a real plot to get in the way. It’s so breezy that you really won’t care things don’t really make sense.

The art is truly beautiful. The film really is a piece of fine art and should be held to be one of the great animated films. Its stunning to look at especially on the big screen. Seeing it cleaned up and restored and really big I kept mumbling “That’s so cool” over and over again.

And it moves better than before. Stripped of whatever was in the old version (I’m sorry I didn’t go back and look) this version moves like the wind. It just goes and goes and goes from one minute until the next.

To be honest the blending of old and new animation isn’t seamless. You can see it even if you’re not looking for it was there is a change is grain and in the animators hand. The newer animation is less detailed and there is a noticeable change in some of the secondary characters. Its not fatal, and after the first time or two you ignore it because you’re too caught up in the story to care.

This is a must see.