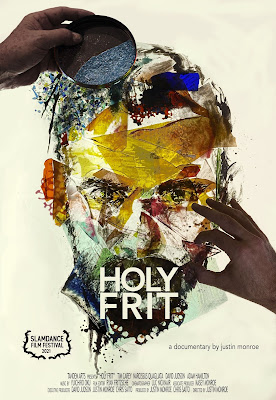 This is the story of the largest stain glass window in the world. It is supposed to be 40 by 100 feet. It was to be for the United Methodist Church of the Resurrection. Tim Carey, an artist living in California won the bid however Tim wasn't sure how to complete the project and had to find someone to help. But that's not the whole story...

A wild and crazy tale full f great characters and unexpected turns. HOLY FRIT is a joy. I walked into the film with zero idea what the film was, I simply said yes to someone offering the film, and when it arrived I put it one without looking to see what it was about.

I had a blast watching this. Yes the story of the making of the window is fascinating but the film is also full of great people you'd want to hang out with. I also like that there is more going on than just the making of the window. The unexpected addition of a lawsuit spiced things up that you never are uite sure where this is going to go.

While I could quibble about the film's two hour run time, it actually isn't that far off the mark  since the film is so loaded with good stuff that a little bit of excess is perfectly fine.

HOLY FRIT is a really good film and a good time