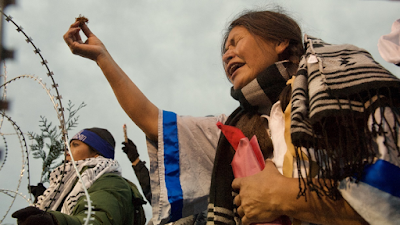 This is the story of the NativeAmerican women who built a camp to protest the Dakota Access oil pipeline which cut across their burial and prayer sites and threatens their land, water, and existence.
This is a good film record of some kick ass women standing up for what is right. Sadly it is yet another tale of the American government screwing over the people it came to an agreement with. It is a story that is going to piss you off.
I suspect that some people might not want to see the films because it is a story that is similar to other stories of Native Americans standing up against a pipeline, and while technically that might be true the reality is this sort of thing keeps happening. And while it may not seem like it could effect you, as is pointed out, the truth is that these pipelines will effect the water and lands that are important to more than the tribes. You really should give the film a look.
Recommended
Posted by Steve Kopian at February 13, 2021