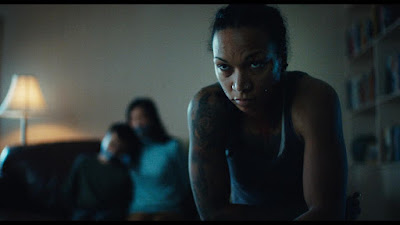 Josef Kubota Wladyka who scored at the 2014 Tribeca Festival with DIRTY HANDS returns to the festival with CATCH THE FAIR ONE about Kaylee, a Native American woman looking for her sister who has been human taken by a human trafficking ring.
Full disclosure, I was not a big fan of Wladyka's earlier film  but I do like his new film. As with the earlier film the film looks great, has mood to burn, but the there are problems with  some of this.
Part of the problem with the film is that while the film's reason for being is to rescue the kidnapped sister, there was  no sense of the sister. While she is a shadow or idea to Kaylee (something Wladyka explained to me when I spoke with him) she is a little too ethereal for us. There is also a problem in that the world isn't fully set up, and some of the peripheral characters are a little too sketchy
What isn't sketchy is Kaylee, she comes across as a fully formed person thanks to a stellar and award worthy performance by Kali Reis. Reis is a world champion boxer and a force of nature. We can't help but watch the film because her physical presence is so commanding. It doesn't hurt that she is a damn fine actress who knocks it out of the park in the emotional scenes. She is an actress to watch because she can seemingly do it all. She is so good you will want to see what she does next, perhaps kicking the ass of someone like the Rock. You'll want to see it because with the right project she is going to be huge.
While I have reservations Kali Reis is worth the price of several admissions.
(My interview with Josef Kubota Wladyka and Spirit Award nominee Kali Reis will rerun tomorrow)
Posted by Steve Kopian at February 07, 2022