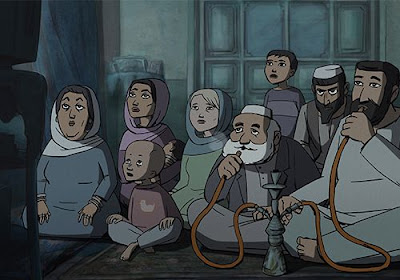 MY SUNNY MAAD is the story of a Czech woman who finds her country men boring and ends up falling madly in love with an Afghan man. After a two month courtship she moves to  Kabul and they marry.  As she tries to adjust to her new life she discovers that she and her husband can not have children and they take in a local boy with health issues.

This is a look at life in Afghanistan between the times of the Taliban. It’s a sober and bracing story of life in place most people only know from the news. It’s a film full of life, both the good and bad. We get a look at the patriarchal society that existed there even as women were given more freedom.  But we also get a loving portrait of some really good people.

This is a film that is very much for more mature audiences. Despite how the images look this is not a film for kids since it is dealing with some very serious subjects. It’s a film that is similar to, but lighter than SWALLOWS OF KABUL and FLEE.

I really like the film a great deal, however I know I need another viewing to fully unpack everything that is going on in the film. I also know I will need to space my next viewing out for a bit because this film has some deeply emotional and hard hitting moments.