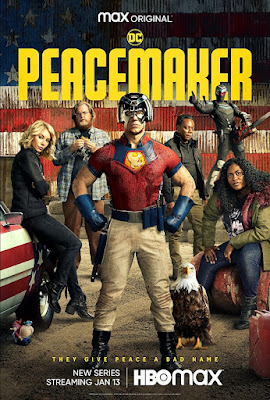 Picking up after the events of James Gunn’s Suicide Squad, Peacemaker follows John Cena’s character as he gets out of the hospital. Still a convicted felon he is forced by a group of agents working for Amanda Waller to act as an assassin on Project Butterfly. He is tasked with killing various people who are codenamed butterfly. Cena thinks its stupid until he finds out that evil insects from space are trying to take over  the earth.

Playing better than Gunn’s Suicide Squad the series the film still mixes juvenile humor with incredible violence and surprisingly good plotting. I say that last bit as someone who has kind of soured on Gunn’s films of the last few years. To me he’s been playing to the fanboys at the expense of everything else. While Gunn still does that here, allowing sequences to spin out in gross and vulgar ways for no discernable reason (I mean the whole ransacking of the apartment in episode 1, the shooting with Vigilante in episode 2 and the drawn out torture sequence in episode 3) the plot is actually rather well plotted and if he chopped out some of the fanboy service he could have had a tight five episode arc.

Quibbles about the stupid stuff aside I actually am enjoying Peacemaker enough to recommend it.

The above was written before I finished the series. I've now finished it and while I liked the first half of it I'm disappointed in the second. I think the story gets out of control and Gunn allows his baser instincts to shine (And while I thought the series pulled it together in the last episode the pointless cameos pushed it off the table since they are only there to play out an over used joke and to have the characters say fuck).  While I didn't hate the series I'm disappointed in where it went. I'm disappointed that the show went from one where I looked forward to seeing the next episode to one where when I was done I knew I would never give it a second thought.

Worth a try but expect your excitment to fall off.