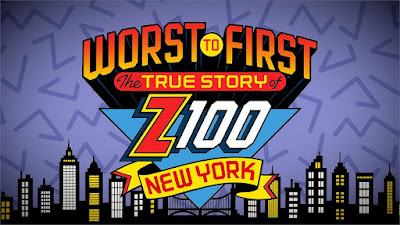 This is a look at the Scott Shannon years of New York Radio Station which went from worst in the city to first when Scott Shannon was brought in to run the station and do the morning show. Shannon used the Zoo formula that he perfected in Tampa and used it to turn to the station into a cultural phenomenon.

This is a breezy rush of nostalgia. If you lived in the NYC area during the heydays of Z-100 you will end up smiling because something in this film will bring back a flood of memories. Z-100 was everywhere for decades and it was the place where people wanted to go to hawk their new record, show or movie. Everyone passed through its doors and they have the video to prove it.

I had a blast watching this film. It brought back so many memories- it brought up all of the various characters that I loved to listen to in the morning.

That said I’m not certain how this is going to play for anyone who doesn’t know what z-100 was. Yes the station was all over the media and I’m sure people may know Scott Shannon, but I’m not sure how many people, especially of a younger age and not in New York  will have any clue what the station was all about. Yes the film will give them an idea, but with brief run time of just over an hour they still may feel a little lost.

That said this film is entertaining. It is full of great stories that will carry over.