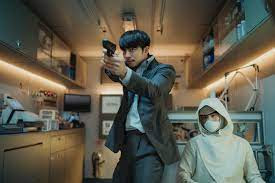 Seobok is the name of a messenger of a Korean emperor who was looking for a means of becoming immortal. It is also the name of the first genetically created clone/hybrid who was designed so that he could never “die”. His cells reproduce  rapidly and he must  take a chemical to slow his cell division. He was also designed to have his tissues and blood harvested as means of giving other people immortality. After his creator is killed in a drone strike the company/government  bring in an agent to protect the boy at all costs. Of course it all goes horribly wrong.

Nihilistic comic infused philosophical action film is nothing we haven’t seen before.  It’s the old “hero must protect the savior” tale gussied up in modern dress (calling Professor X).  Its a lot of talk punctuated with a few kick as action sequences. It is also incredibly nihilistic with our hero having a brain tumor, the reason for Seobok to exist being harvesting and philosophical discussions that will make you want to slit your wrist- and I won’t even talk about the ending.

I was mostly bored. Yea the action is great but there isn’t enough to overcome the leaden pacing and the sense we’ve seen all of this before.

If you must see every action film give it ago other wise you can skip it.