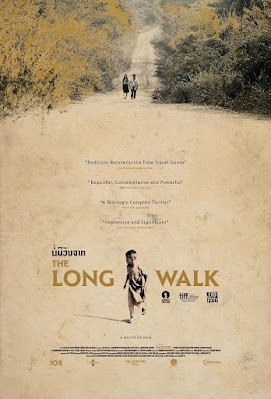 In trying to write up THE LONG WALK I turned to look at how my fellow writers handled discussing. I say that because the film is like an onion where each moment reveals something else that turns everything you thought you know on its head. Some people gave it all away and some people didn’t.

I’m going the I’m not saying anything route.

The film gets going as we meet a middle aged man who talks to ghosts. Picking up a crashed motorbike he meets one that can send him back to a time before his mother died. He then begins to travel back and forth…

And that’s all I dare say. There are numerous turns and I’m not going to spoil any of them.

I will say that this is a very good film that you should try to see. If you can, see it with as few distractions as possible. I say this because even though this is a low key film things happen. You really need to be focused on the film because you might miss something. I say this because I looked away for a moment and realized I missed a bit and had to back it up.

That said if you like quite genre bending films (this is kind of a character study with a thriller and drama mixed in) or films that are completely off the beaten path THE LONG WALK is a must.