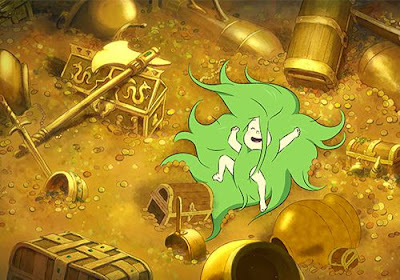 The Dragon Princess is one of the best discoveries of 2022 so far. This is a glorious old school fairy tale that will delight everyone.

The plot of the film has a dragon making a deal with frog sorceress in order to be given children. From the three eggs two male dragons hatch and from the third a magical young girl with green hair who is part  dragon and part human her name is Bristle.  When Bristle meets a head strong princess from a nearby town they become friends much to the annoyance of her father.  Bristle then travels to the near by town and learns a lesson about humans, friendship and family.

I can’t say enough good about this film. This is fairy tale of the sort they don’t do any more. It follows the expected lines from start to finish, however it updates things with a more modern take. Greed and gold are bad.  Royalty exist to do good and the bonds of friendship and family are everything.  More importantly this is a fairy tale where women kick ass. The mage who puts everything in motion is a woman. It’s about princesses. Most importantly the one’s doing the right thing and kicking ass are the women. They are the one’s doing the good deeds while the men are behaving like jerks. This is a film that you will want to show your little girls.

At the same time I think boys and men will eat this up because this is such a good story they won’t care who is at the center.

I need to point of the magnificent animation. Done in largely old school 2D style the film looks familiar in the best sort of a way. Yet at the same time it uses computers to create some amazing effects, in particular the look of the dragon, which is so magical that I kept stopping the screener I was given to review the film to just look at the images and see what they did.

This film is pure magic of the highest cinematic sort.