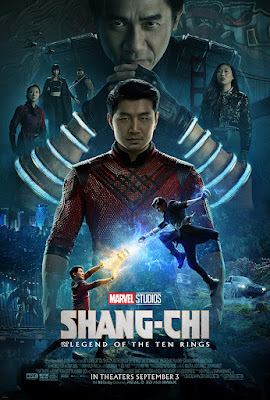 Shang-Chi is one of the best Marvel films. A stand alone film it is the first time since the current series started where I had genuine wonder.

The plot of the film has Sean, aka Shang-Chi, living in San Francisco. He is hiding from his father who is the head of the Ten Rings Organization. When he is attacked on a bus by his fathers men looking for a pendant his mother gave him he heads back to China to try and warn his sister.  He not quite too late as his father’s men attack right after he meets his sister. It seems his father needs the pendants to find the village where he met his children’s mother. He believes that she is still alive and being kept prisoner by her family. He wants to rescue her but things are not as they seem.

I don’t know what to say except this film is magic. The first part of the film plays like a Chinese fantasy film. The film than shifts gears into various styles that enhance the telling. It’s a move that drags us along effortlessly as the film seems to open up into some thing new at each turn.

I love the characters in this film. No one is black or white. I love that everyone arcs. I love that Shang-Chi’s father, the nominal villain is not really a bad guy but someone struggling to find a lost love. That we have real characters who really arc is a first for the MCU and it makes everything so much better. I also love that each character is well defined. Anyone who is not a masked soldier has a personality and it makes things better.

Additionally this is the first film where there is a cost for everything that happens. People we like die. They die not in a comic book way – you know where everyone comes back- but genuinely dies.   Good people die in the final battle and it hurts us.

This was also the first film in the series where I had a sense of wonder. Yes I know it’s a comic film but it didn’t feel like it. It’s a film that feels like it’s something special. It’s a film that is taking us to some where we’ve not been before. This is particularly true of the massive battle at the  end which is not something that’s been put on any screen, particularly one showing a superhero film.

I loved this movie. It made me feel like I was a kid again. It’s a film that made me fall in love with the movies, something that I haven’t felt for most of the last year or two.