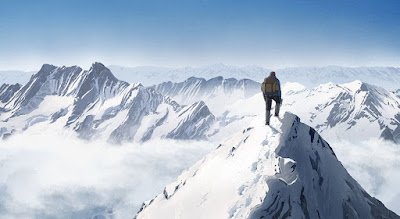 This is the story of a photgrapher who gets involved with a climber going to Everest and who may or may not have the camera that Mallory had with him on Everest in 1924.

This is why some films should be animated. A deeply moving, deeply philosophical film it does things in ways that only animation can do. This is quite honestly one of the great animated film of the last few years.

Based on a manga which was based on a novel SUMMIT OF THE GODS feels real. As Glenn Kenny said in his review for rogerebert.com the film feels like a documentary.There is a weight to the proceedings. The characters feel fully formed. The places they inhabit feel real. You believe what you are seeing past the edges of the screen.

What I love about the film is the philosophy. This is not just a story about climbing a mountain, rather it's a deeper exploration about the things we do in life. It's not why do these guys climb mountains it's a question of why do we live the ay we do.

This film is a stunner.

Highly recommended for anyone just wanting a great human story.