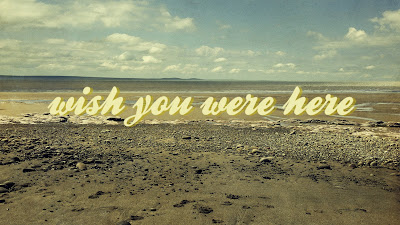 I love Shaun Clark. He is one of my all time favorite filmmakers. If you want to know why, it’s because every film I’ve ever seen from him is something completely different. He’s done takes on Poe and Shakespeare and now a simple day at the beach.

WISH YOU WERE HERE is a day at the beach. It begins with a single shot of a man digging by the water and then it becomes something else as more and more people show up.  Eventually they all leave… and in between it’s one of the funniest things I’ve seen in ages. Its funny not just because of "jokes" but because of the "ah yes" connections that make you see things in new ways

Actually what it is completely out there as people play frisbee, deal with the rain, drive around on a chair, read and repeat.….if I had to compare it to anything it would be the Python animation of Terry Gilliam, however at the same time Clark’s sensibility is bent in a different way and his visual style is completely his own. If I walked into any of Shaun Clark’s films I would know it was his film even if he worked in someone else’s territory because it is always clearly his world view; as such the comparison to Python is purely is only used so you kind of have an idea of what  Clark is doing, the reality is the film and Clark's work is gloriously his own thing.(And it is on just as high a level)

Simply put this film is a masterpiece. Its  surreal treat of the highest order. It’s a film that makes you feel good in the best sort of way.