"He's probably better for you than me"

"But I'm not better for him"

Lena and James are the band The Brink Of...  As they were ending a six month tour and right after an influencer tweets put them on the radar of the world at large, they disappear. As the film begins the duo is back and are on a radio show explaining what happened.

If you know director Patrick Meaney you will think either of his comic work both as a documenary filmmaker (he's profiled Neil Gaiman, Grant Morrison and Chris Claremont) or as a writer, or you may know him as the director of the horror film HOUSE OF DEMONS. He would not be someone you instantly think of as a director of a sweet musical romance, but with THE BRINK OF.... he makes  romance films his own.

Beautifully acted and posessing a kick ass group of songs THE BRINK OF... soars. Director Meaney has fashioned a heartfelt and moving film. Its a film that had me misty at the end, not because it manipulated me but because it has given us a couple of people we can really root for. We like them  from frame one and are willing to go anywhere with them. 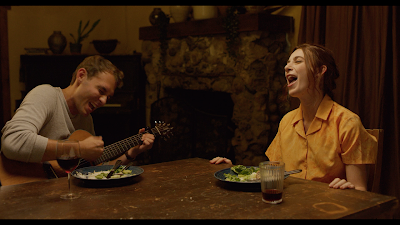 What I love is that in fashioning a love story Meaney has taken the romantic formula and used its tropes against us. I'm going to be honest and say there was a time when I just liked the film. The film was doing everything it was supposed to and hitting all the points exactly right but it didn't seem to be going the extra mile. It was technically great but it didn't seem to have all the emotion wired up to the power box... but at a perectly placed moment there is scene where the script clicks and you realize that while we were distracted with the songs and other things Meaney was laying in the heavy gauge wire so when the big moment cmes so do the the tears (and big yelp of joy which scared the neighbors). Everything that seemed to be throwaways cmed crashing it with a weight we never suspected. Simply put THE BRINK OF... does what few films do these days and gets the emotion and love of the audience by earning it and not manipulating us.

Nicolette Norgaard and Tim Hoffman kick it out of the park. They make us believe that they coud be a  couple everyone knows are destined for each other but who refuse to see it. Indeed they manage to make that notion a perfectly played running gag. The pair also wrote their own songs and the emotion in them make the film even more special. Frankly while Patrick Meaney may have created the framework for the story, Norgaard and Hoffman's music, and their performances give the film life.

This film blew me away. Not just because I was sent the film totally blind and had no idea what it was at all, but because the film is just so damn good.

You must see this film because it will make you feel good.

The film World Premieres February 27 at the Golden State Film Festival and tickets and more information can be found here.

Look for mre on the film and an interview with director Patrick Meaney soon. 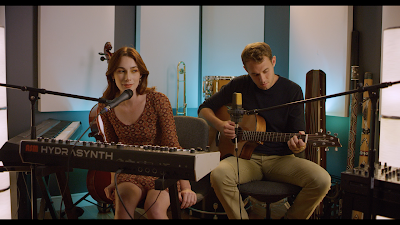